In the 1970s, talented French illustrator, Tomi Ungerer was living in New York City. I still remember his brilliantly funny ad campaign for the Village Voice: Expect the Unexpected. Ungerer’s posters featured images like a stork delivering a baby to an elderly couple—the man was wheelchair-bound. Another showed a bare-chested man wading in the ocean and holding an open-mouthed fish that was about to swallow a yellow submarine.

Tomi Ungerer was born in Strasbourg, France, during World War II—a traumatic childhood, to be sure. I know this experience shaped Ungerer’s artistic images and sensibility. There’s an edge to many of his works—even his children’s books, like No Kiss for Mother, which is full of dark humor and pathos. Ungerer was also known for the public relations campaign he did for his native city, wherein, he produced scores of startling images like the famous Strasbourg Cathedral turned upside down to form the heel of a fashionable shoe!

A few years ago, I spent an exhilarating hour at the Tomi Ungerer Museum in Strasbourg, which, according to the website, opened in 2007 and houses 8,000 pieces of his work, including children’s books like Flix (cover art shown above), and Ungerer’s collection of antique mechanical children’s toys (below). 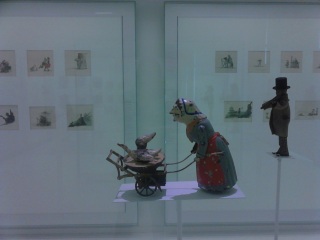 While majoring in Illustration at Parsons School of Design, I was a great admirer of Tomi Ungerer’s expressive line, his bold palette, and daring sense of humor. Expect the Unexpected pretty much sums up Ungerer’s entire oeuvre, and his illustrations still make me laugh!

Do you have a favorite illustrator who has captivated you? I’d love to hear your comments.